Operation Wolf is definitely one of the most famous computer games of all times! But if you're new to computer gaming then you may have never heard of it.

Your goal is to shoot and kill everything you see (except for the nurses and civilians that move around occasionally). You only control your aim throughout the game and shoot bullets or granades. And all the same through 9 levels or so. Back then this was a hit game but nowdays it's below average.

One of the most classic shooters ever made. I would thing you were lying if you told me you haven't seen this game around one of the play machines around your block. This game is probably the one that has gotten most success through these kind of machines. It was also the first game to feature a gun which you control instead of some different buttons.

The overall goal in Operation Wolf is to kill as many soldiers, helicopters and tanks while you fight your way through the different levels. I'm not a big fan of these games, but I can see why a game like this got so popular as it did. The graphics are ok, but it's sad that the sound is going through the PC Speaker and you don't have the option to use your sound card. That would have added much to the overall rating of the game.

One of the better conversions of Taito's arcade games, Operation Wolf, like its arcade counterpart, is a furious first-person shooter that goes beyond a typical 3D target practice with fluid animations, a wide variety of enemies, and fun bonuses. Gameplay is standard click-to-shoot, but what makes Operation Wolf fun is that there are many types of enemies to shoot at, all of whom animated realistically. You will see infantrymen rolled from side to side to evade your fire before lobbing grenades at you; tanks lumber along and aim their deadly gun barrel at you; helicopters that hover too low can be shot down; et cetera. There are many ammo types and grenades to collect and use, as well as necessities such as first aid kits that restore your health.

Operation Wolf may be mindless, but it's mindless fun at its best, for the same reason that its arcade counterpart was a huge quarters eater. Great for taking a break from more demanding action games on the market.

The predecessor to other "shooter-on-rails" games such as Time Crisis, Virtua Cop and House of the Dead. If I recall correctly I can remember three games of this type being released on the ZX spectrum when I owned it - Opertaion Wolf Operation Thunderbolt and The Untouchables. Operation Thunderbolt was without a doubt the best, but this game is the classic.

The game is a first person shooter that scrolls slowly from left to right. Use the mouse (or if your a sadist, the keyboard) to move the target indicator around the screen, shooting enemy soldiers, tanks and helicopters (and the occasional turkey - play the game, you'll see ;)). The game is best played with a lightgun.. but since that option isn't available for the PC (hehe losers) you are stuck with the mouse.

Thr game is great fun, but after the third level or so it gets slightly repetitive. However, if you want a game that is easy to get into and involves lots of frantic shooting, this very well may be the one for you. 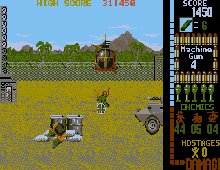