A much better conversion of arcade hit than the original Ninja Gaiden for PC, Ninja Gaiden 2 opens with a great musical theme accompanying a cinematic scene. You learn that Jaquio, the evil crimelord you defeated at the end of the first game, is a mere stool pigeon for Ashtar, an evil lord who has an even bigger castle than Jaquio, and more sinister eagles. And of course, to motivate you to storm his stronghold, he has captured your girlfriend, the heart of whom you won at the end of Ninja Gaiden 1. So what is there to do except trusting the Dragon Sword once more...

Ninja Gaiden 2 boasts a few new gameplay features in addition to sharper, VGA graphics and smoother animations. First of all, you can amass up to two clones of Ryu who mimic his every move and attack. These doppeldangers amount to tripling your attack power, and are a lot of fun to watch in action... try somersaulting around the screen and quickly rolling back and forth for a nice little circus show :) Secondly, you can finally climb all over the walls without having to snap your controller back and forth. This makes Ryu a bit more like Spiderman than a true ninja, but it does help him attack the enemies from improbable positions that are sometimes impregnable. Finally, the stages now feature some great graphical effects for the background, including moving trains, snow storms, etc. One thing that hasn't changed, though, is the fact eagles can *still* hurt you more than a 20-mm artillery shell fired one inch away from your face. The game overall is not as frustratingly difficult as the first game, though, which means action newbies will be able to actually enjoy playing the game (as opposed to seeing death scene every 2 minutes). With improved graphics and interface, many hidden surprises (including bonus levels), and a great storyline, Ninja Gaiden 2 comes very close to the arcade and Nintendo classic in the addiction quotient. 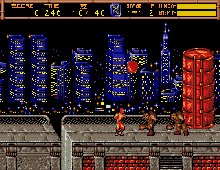