Commando is a superb side-scrolling platformer from Fallen Angel Industries, one of the best freeware making groups. The excellent review at Totalklik mirrors my thoughts almost exactly:

"Commando is one of the best click games I've ever played. The combination of tense jungle and city warfare action, superbly designed levels and adrenaline pumping, to-the-point cut scenes is unmatched. [The game is a] platform shooter in the style of Metal Slug and Megaman games. The premise is that Cuban terrorists have just hijacked a cargo line in Texas loaded with nuclear weapons and a full scale assault is quickly mounted on their stronghold. You play the role of Commando, a specialist in the task force sent in to retrieve the nukes from the terrorists. The game will take you through a wartorn jungle, a military stronghold in the Arabs, and the terrorists' snow covered stronghold.

Seconds after the game has started, you'll find yourself parachuting into enemy territory, avoiding razor wire while dodging gunfire and shooting down ski masked grunts. Each and every enemy has been well positioned and made ready to take you down by surprise; you'll soon see that creativity with your weapons and different styles of attacks are needed to take down every enemy you encounter. Several weapons will assist you in your task, but finding a lot of them in well hidden areas is part of the fun. A variety of thrown explosives can be found as well.

Part of what makes Commando so involving and exciting is the cinematic sequences ingame. Aside from a few ingame and out cutscenes, you'll be in a gunfight with a few terrorists and things such as airstrike bombardments and paratrooper assaults will be taking place at the same time. One of my favorites is when you are making your way through a warehouse and cunning terrorist surround you by dropping out from the ceiling hanging on ropes. It all adds to the constant excitement. There are also a number of bosses and mini-bosses to fight, each having their own attack patterns which must be carefully observed if you are to defeat them.

The graphics are quite simple but look great when twenty things are happening at once. A nice touch is the erratic screen shaking when a grenade or rocket explodes. Gibbing an enemy is very satisfying; blood, gore and bones take off in every direction. Although the music wasn't specially produced for Commando, it was well chosen and each track fits in perfectly depending on the situation.

All in all, Commando is a very exciting and well designed platformer and is the new benchmark on what freeware developers will be basing their works on. Gunner 3 has been toppled from it's throne. Don't be surprised to see new platform shooters in development over the coming months. Frankly, I can't wait to see what the future holds." 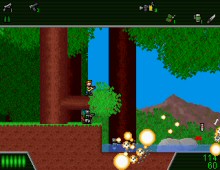 People who downloaded this game have also downloaded:
Contra, Commando Enhanced, House of the Dead 2, The, Golden Axe