P-47 is a good PC conversion of Jaleco's arcade game of the same name. A decent side-scrolling shoot'em up set in World War II. Two players can fight their way through at the same time. Nice graphics, many different extras, but overall I found the difficulty level way too high, making the game very frustrating even with 2 players. This is the EGA version of the game. A slow-down util can be handy on modern computers, although the game also offers the option to change the speed in the main menu. 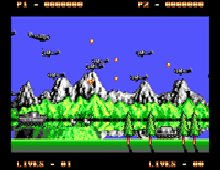