Harrier Attack is a great PC remake of an 8-bit oldie of the same name, most popular on the Amstrad CPC platform since it was part of the free software bundled with the computer. You must take off from an aircraft carrier, dodge guided missiles fired at you from an enemy ship, then fly over a heavily defended island, bombing the anti-aircraft guns while avoiding the enemy fighters and shooting them down.

The game is very addictive because, similar to other classics such as River Raid, the shoot-everything-in-sight gameplay is not as simple as it looks, because there are many aspects that make the game more challenging and varied. For example, you can speed up, slow down, as well as fly up and down, but if you fly too high you will be detected by enemy jet fighters who will attack you with guided missiles. While you can try to shoot down the enemy planes and ground defense with your rockets, right after firing the rocket you must immediately get out of the way from the explosion radius. You can also abort any mission by ejecting from your aircraft before it blows up, and you will get bonus points as a reward. Finally, you have to keep your speed up or you'll run out of fuel before reaching the climactic bombing run on the town, then it's back to the aircraft carrier to land and prepare for another sortie.

This remake is based on the ZX Spectrum version, arguably the best version of the game. You can tell the game is a labor of love for its author because it not only retains the glorious 8-color palette, but also implements subtle improvements, such as the elimination of color clash: your plane can now fly behind the clouds and not turn white in the process. If you love River Raid or Raid over Moscow, you owe it to yourself to try one of the best shooters of the 8-bit era - now available on the PC for the first time thanks to a fan effort. Highly recommended! 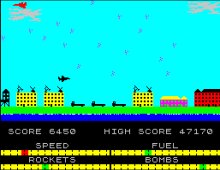