Fury of the Furries

An amazing game, a very smart platform game with a combination of four characters (little hairy creatures), with a special ability to each, that makes thier actions very cool and fun. the game itself feautures great graphics and sound, complicated levels that will make play this game for hours.

I think this game is one of the best of his kind. If you liked Vikings and Lemmings you'll love this one and if you are a platform games fan, you probably played this game already, if you didn't, well...play it now then!

A really great game that combines aspects of the Jump 'n Run-genre with Puzzle-elements of a Lemming-style game. You have your 4 little Furries (colored fur-balls with feet - obviously alive...) to choose from (not all are available in every level) and they all have their specific talent like eating rocks or swimming for example. The fine graphics, great soundtrack and intelligent levels do their part to make this game a top-choice for all ages. Don't miss that intro btw. - one of the best I've ever seen!

Fury of the Furries is a great cartoon platformer/puzzle game from Kalisto that was released only in Europe (as an interesting side note, Kalisto released a very similar game based on the same engine called Pac-in-Time in the US shortly after, although it features the famous Pac-Man instead of Tiny, and the levels are different and not as much fun IMO as this European title). The description and at MobyGames gives a good overview:

"In Fury of the Furries, you control a cute, round creature called Tiny, who must defeat "the wicked one" who has captured the King, and turned all the Tinies into mindless monsters. Fortunately your Tiny has special powers. It can transform himself into a swimmer, rock eater, fireball spitter, or rope swinger during its quest. The game takes place on a huge island separated into eight regions: Desert, Lagoon, Forest, Pyramids, Mountains, Factory, Village, and finally the Castle."

The game has a lot of neat concepts that add a lot more depth than a typical platform game. You can switch between different Tinies, each with different abilities, and there are some physical puzzles to solve (mostly of the "how do I get from point A to B?" variety). The downside is that you can save only after every 5 levels, which is something that might frustrate action beginners. I don't find the game particularly difficult, though, as there is a good balance between fighting monsters and solving puzzles with various Tinies. If you enjoy Lemmings but want more action, or if you enjoy Sonic the Hedgehog but want more depth, Fury of the Furries fits the bill as one of the most innovative action/puzzle hybrids ever made. Highly recommended! 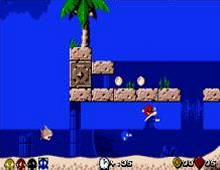 Fury of the Furries screenshot