Frogger II: Three Deep is a fun sequel to Atari's cross-the-road classic Frogger. Instead of the road, this time Mr. Frog must swim from the bottom of his pond past deadly foes to get to three moving home bases on the surface. You can hitch a ride on a passing turtle or catch bubbles before they surface to get extra points. Once you succeed, Mr. Frog will then proceed to the next screen, where he must hop onto lily pads, alligators, ducklings (watch out for momma duck ;)), etc. on the way to the surface where a boat will tow him home.

It's quite amazing how many variation of "move past obstacles from one end of the screen to the other" theme SEGA could come up with. After you pass the first two levels, you will return to the first 2 screens. Just when you think this is where the game starts to repeat with faster enemies, though, you'll find yourself in the clouds, jumping from bird to bird (!) once you jump on the momma duck's back at the end of the second screen. After every 2-3 levels when you find yourself back to where you were, there comes a new surprise to keep you going. From the main menu, you can select from 2 possible difficulty levels. Level two (the harder one) is much more difficult (e.g. stronger current) but also rewards you with more surprises. Good graphics (as good as a 1984 game can get, anyway) and sound effects round off this excellent Frogger game that I would argue is more fun than Hasbro's recent cosmetic remakes. 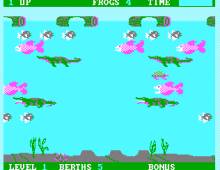