Dig Dug is a very old arcade game with a similar look as the younger and more popular Boulderdash game. The actual gameplay is not quite the same as you don't have to collect anything in order to complete the level. Instead you just have to make sure all monsters are either killed or flee (they seem to do this when you get rid of the main part of all the monsters on the level.

The actual game is quite slow and when you think you have clicked right it might take a little while before your characters actual reacts. This makes the game quite hard to play as you very quickly get frustrated about this since you often die when two monsters are near you because you can't shoot both of them. Besides shooting the monsters with some kind of stick you can also kill them with stones included on each level. As in Boulderdash you just have to convince the monsters to go after you and then release the stone and make it fall on top of them.

Good CGA graphics (is that possible?) makes it easy to see what things are what but a very annoying beeper sound makes Dig Dug an almost standard arcade for this time. It's a nice and simple game idea though but the game area is often a bit too small when you consider how long it takes to move around. But if you can get used to this Dig Dug can take a little of your time but is overall an average game.

DigDug - a legendary game. Never played it on a "real" apple (never owned one), but I remember playing it on my C64. You set out to defeat vermin... erm... very very evil vermin. You got some kind of... thingy... to pump them up. Okay, this is a bit vague, but to be honest - in the early days of computer games such things didn't always make so much sense. However you dig into your garden to get rid of certain unwanted animals (?) by either pumping them up or letting rocks drop on them. The last thing gives you more points, but is also more difficult to achieve. You have to dig unter a rock and time it so when it falls down (always takes a second or two after it's loose) it will hits your follower. It's usually not the safest to count on this, however if you got one of those monsters on your back your only chance usually is to get a rock to fall on it as you wouldn't have the time to turn and pump - and running backwards while firing was only invented 15 years later in 3D... *coughs*

So basically you get a weird game that surely became a classic. The PC version runs fine even without slowdown programs.

Dig Dug is a great PC port of Namco?s coin-op classic of the same name, ported by Atari. You are Dig Dug, an intrepid gardener whose soil is infested with pesky Pookas and fire-breathing Fygars. You're armed with your trusty pump, which you can use to inflate your enemies until, finally, they blow up. But both the Pookas and Fygars can crawl through the ground and can pop out into your tunnels, and if a Fygar sneaks up behind you, he can toast you if you're not careful. Like other arcade classics, the game is easy to learn but hard to master ? and highly addictive. A must-have, but not as timeless a classic as Windmill?s Digger. 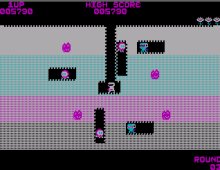