One Must Fall (Beta version)

One Must Fall is an early beta version of the excellent fighting game One Must Fall: 2097. Interestingly, it is remarkedly different from the released version, it was originally developed as a side-scrolling karate game, with no signs of giant robots... hence, the absence of "2097" in the working title. Even at this early stage, the fluid animation and excellent fight controls are apparent. A good beta version that is surprisingly playable. 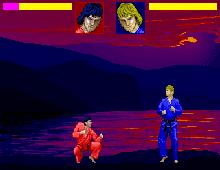 One Must Fall (Beta version) screenshot

People who downloaded this game have also downloaded:
X-Men: The Ravages of Apocalypse, Nightmare Creatures, X-Men: Children of The Atom, One Must Fall 2097, Earth Siege 2