One Must Fall 2097 is, in some ways, your typical fighting game. There's a punch button, a kick button, and an 8-way joystick. You can play as 8 different pilots piloting 8 different robots in the 1 or 2 player game and in tournament mode, you can create your own pilot and buy one of 9 different robots. So, what makes this different from all those other fighting games? Quite simply, the game is executed wonderfully. Most PC fighting games were ported from another platform; this one was built for computers. The action's smooth, the controls are responsive, and the graphics are pretty. Characters are well balanced with just a handful of moves, none of which are overpowering. Things are built in such a way that tactics actually play a part in how you play rather than just button-mashing. All in all, this is an excellent game to get if you're a fan of fighting games.

God bless this game. The best fighting game EVER! (my opinion, but i had to say it :) This game shocked it's genre amazingly, becuase it was published at the Mortal Kombat (1-2) days, and was even a greater succees. The combinations of this game was unbeatable - while you fight in leagues and challenge other competitors, you also use the money you earn to upgrade your robot, or buy a new one. You start at the lesser leagues and climb to the top and reach the Fame!

The sound and graphics are amazing !!! Thinking of combination games, that usually stink, and has bad graphics and sound because of the invest in the combination, this game is a phenomenon! God, Download already!

This one's a GREAT game, went on the market along with Mortal Kombat, those who have tried it in that period gave an unanimous sentence about the superiority of OMF. The player has the role of a robot pilot, who must fight in various tournaments against other pilots, each caracterized in his attitude and in his fighting technique; the combats will take place in various arena, which are alone a test for the player, being a desert bombed by planos, or a holo-projected arena where the hitting a sphere will cause an Inferno of Flames under the opponent's feet. As if this is not enough, we can custom our robot in every aspect, including the colour of its sections, or by mounting better actuators to increase speed or power...this gives the game a rare(if not unique)RPG feeling in a game which normally would have nothing to do with that genre, and you'll not be able to avoid the "Just another fight, just one".

Plus, One Must Fall has one of the best soundtracks I have ever heard in a game, and a graphic of all respect, this one's truly a classic, which MUST be on your hard-disk, whether you are a lover of the genre or not.

One of the BEST fighting games ever made. Period. When it first came out the response on the action newsgroup comp.sys.ibm.pc.games.action was overwhelmingly positive, despite garnering virtually no attention in the gaming magazines. Pick your trusty mech and enter the many competitions to win fame and fortune. Numerous upgrades to your mech can be had for a price, and the ability to improve your own character, RPG-style, is a nice touch. Now I'm *not* an action gamer, but this game did keep me hooked for hours. 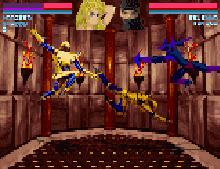 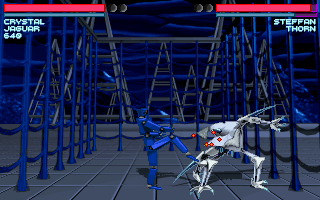 One Must Fall 2097 screenshots