Ocean Mix comes with probably the longest loading time I've ever seen for such a small game. While this isn't a good start, the rest makes up for this. The game is a "score-attack" shooter: you haven't lives or energy, but 120 seconds to make the highest possible score. By accumulating points, you can also receive bonus seconds, thus prolongating your playing time. On the other hand, every contact with the enemies or their shots will cost you five seconds.

What makes Ocean Mix a lot of fun is the demented setting: you play the role of a little girl flying on a broom, and shooting little fishes at lots of flying sea creatures with hostile intentions toward her. Typical Japanese weirdness ;) Floating around the screen, there are many striped ballons; by shooting them, they bounce and can be used against the enemies. Plus, they can be collected as bonuses, the more you hit them, bigger will be their value. They are very useful for making points: no wonder the little girl cries if you hit one :)

On the bottom of the screen, a power bar slowly fills, up to three levels. By pressing the second button, you can use one of the three possible smart-bombs, obviously marine-themed and demented as the rest. Sometimes, between the "usual" sea creatures, you could find UFOs and pumpkins. The more you survive, the more you are likely to find such fun surprises. Ocean Mix is one of that games generating a "one more try" syndrome, which is not always healthy, especially if your boss walks around :P To add one more point to his score, there's a great background music - repetitive, yes, but never boring and always keeping the rythm. Recommended for every few-minutes break you can get ;) 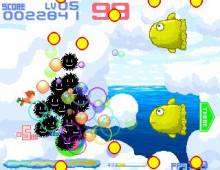