One of the most original action/RPG hybrids I've come across, EVO: Search for Eden is a fun game that throws you millions of years back in time. Starting out as a fish, your task is to climb the evolution ladder by evolving into new forms, all the way to human. The plot is cliché and overwrought, but quite fitting with the unique gameplay: after creating several children (i.e. the planets), the Sun chooses a rather attractive daughter, Gaia, to bring a new being into existence. But before the being is allowed to reach Eden, it must be put through a test: survive billions of years of evolution.

Although the game is considered an RPG by most console fans, calling it an "action game with some RPG elements" seems more appropriate because most of the gameplay involves fighting other animals in 2D side-scrolling screen, platform-game style. You collect "evolution points" when you defeat the animals, and these points are used to "upgrade" various body parts, in other words, to evolve. The RPG elements only come into play when you decide on which aspects to evolve. For example, when you are a dinosaur, you can grow wings, have T-Rex jaws, grow pointy horns, etc. This means your character will look different throughout the game as you evolve into new forms, and the virtually unlimited combinations guarantees excellent replay value.

Sometimes during a level, you will find special crystal balls that will transform you into a past creature, which comes in handy when you fight end-level "bosses" (as I said, this is like a platformer enhanced with RPG elements). Another notable feature is that the game lets you save dozens of creatures you create to a disk, something that not many SNES games can do (although this is muted by the fact that you'll be playing this game on an emulator for PC, which lets you save game states as often as you want).

The game does have some downsides, the worst of which is that it's rather short. There are only five chapters overall, and an experienced action gamer should have no trouble winning it in just a few hours. That's a problem with many action games in general, though, and the virtually unlimited combinations of evolution possibilities means you will enjoy replaying game, trying to create the "perfect" creature. Another problem is that the game gets a bit repetitive, as you will return to some areas over and over to kill enough animals to buy those expensive body parts that cost a lot of evolution points. This is the problem that plagues the majority of console RPGs, so you might get impatient and give up on the game before long. For me, the intriguing plot (which unfortunately does get more overwrought and farfetched as time goes by) and the thrill of seeing my creature evolve were enough attractions that kept me playing to the end. The short length is a boon in this regard: you won't have to tolerate the repetitiveness that long. Overall, I found EVO to be a unique and involving game. 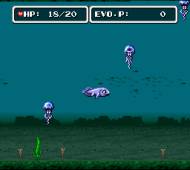 People who downloaded this game have also downloaded:
House of the Dead 2, The, Joust, X-Men 2: The Fall of the Mutants, Gauntlet