Paintball Party is a fun multiplayer action game without blood and gore. The goal: annihilate up to 3 other players in a game of paintball, conducted in a furious 4-way split-screen action on the same computer. There are options, game modes, and even the ability to watch replays of previous deathmatches. Two nice features of the game are slow-motion and zooming, which allow you to watch the action up close. There are only 6 levels included with the game, but the easy-to-use design tool allows you to create your own levels and characters to use. Although there is no computer player, you can still practice your skills in Target Practice and Scavenger Hunt modes.

Crisp cartoony graphics, furious action, and absence of gore makes Paintball Party an ideal game for kids or anyone who dislikes the "cheap" use of blood and gore in computer games. It is not as much fun or varied as Soldat, but it is still a very enjoyable game if you can get enough friends to play. Recommended! 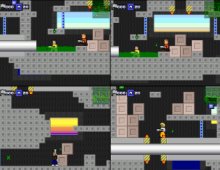