Pretty similar to the legendary Arkanoid game and just as fun. Break the bricks with a small ball, collect letters to get bonuses and do that through hundreds of levels.

From the series of games-that-go-gleep we today got... Impact! Basically your average Arkanoid clone - it has that nice feature of building up the reward you get from the things that fall down - when you feel the reward is good enough you can simply rightclick with the mouse and you got it. Also it's a nice thing to play with the mouse - you have to get used to the fact that a rapid movement of your mouse will also mean rapid movement of your paddle... that means you can ALWAYS reach the ball - in theory. You will never be too slow. But it can be hard to be exact enough. That's also a problem - it's very easy to miss the ball as the paddle simply moves extremely fast.

Anyway - the game got a nice nostalgic touch, however one thing caused me to give it that extremely low addictiveness rating - that's the fact that I instantly made it to the 2nd level on first try, but no matter how often I played I didn't make it beyond. That's kind of frustrating when you simply do not see ANY advance. Maybe I'm just not good at playing this - that's possible. It's a nice game though and the even the CGA graphics of this one are nice.

Impact! is a quite good Breakout clone by Audiogenic with simple graphics but they do their job quite well. The bonus-system works a bit different to the usual Arkanoid way, in that you pick up an "extra-increaser" item and click the mouse button, when you want to activate one - as seen in the arcade shoot'em up Nemesis. I remember this game as being one of those two or three games a year that were reviewed for the IBM-PC back then in my favorite computer games magazine ASM. Overall a decent game and one of the better Breakout clones, but very tough in difficulty. Runs like a dream even on a Pentium II/450 under Windows 98. 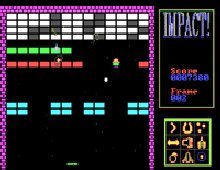