No Gravity is a cool 3D space shooter from Realtech VR. Formerly a commercial game, the source code and later the data files were released into the public domain in 2005. Similar to Wing Commander, you control a spaceship from the first-person perspective. Your job is to accomplish missions, with diverse objectives ranging from destroying enemy ships or base, escorting allied ships, clearing the mine field, etc. In some missions, you are accompanied by wingmen, whom you can control by giving them basic orders such as "attack enemy," "retreat," "protect the base," and so on.

In contrast to most arcade-based 3D space shooters, No Gravity is quite large. Each mission comprises of different sectors, each of which usually contains different objectives. When all objectives of the current sector is complete, you need to go to the nearest NAV point in order to warp to the next sector. Once you complete all objectives in all the sectors (i.e. once a mission is complete), a warp gate appears to take you to the next mission. The game contains 5 episodes, each of which contains 10 missions. The graphics are more than adequate, the controls easy to use, and the action is nonstop, with plenty of enemy types. If you like space combat games, No Gravity is definitely a neat game that is well worth a play-through. 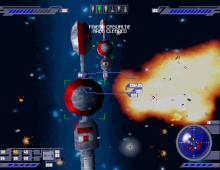