One of the most underrated games for the SEGA Genesis console, General Chaos is a fun and funny arcade/strategy game. Think of crossing the zany action gameplay and humor of Cannon Fodder with wacky strategic elements of Nuclear War, and you'll have a good idea of what General Chaos is like.

The game is essentially a quick and dirty battle (or a longer campaign mode that's just a series of battles) between two opposing squads of 5 soldiers each. The two opposing generals are named, appropriately enough, General Chaos and General Havoc. Before each battle, you select soldiers to make up the squad from various types including gunman, flame thrower, rocket launcher, dynamite blaster, and grenadier. This is very similar to Cannon Fodder games, except the soldiers here don't have individual personality (but then again, Cannon Fodder soldiers always look identical to me - they just have different names. But I digress). There's a limit to the kind of soldiers you can choose, so you can't have put 5 flame throwers on the squad and expect a nice barbecue day ;)

As in Cannon Fodder, you view the action from an isometric perspective, watching cartoony soldiers duke it out on the battlefield. The game offers an excellent balance between action and strategy. For instance, whenever two soldiers on opposite sides get close enough, close combat will ensue. You can punch, kick, or even kick him in the -err, you know. If one of your men loses all his health points, he will fall down and lie hapless on the ground. To help the poor guy, you must move another soldier close to the injured and call out for a medic to revive him, but there's a limit on the number of times you can use medic. There are also many power-ups and new weapons on the battlefield to pick up and use.

The game is a lot of fun both in single player or multiplayer mode. With a multiplayer adaptor (or appropriate settings in the emulator), up to 4 people can play simultaneously against the computer in campaign mode where each battle is more difficult than the last. You can also fight other human players if co-operation isn't your cup of tea. Another high point of the game is the excellent tutorial mode. Called "boot camp," this mode explains all the basics of gameplay and user interface in a clear-cut manner. Not that the game is hard to learn - the game's user interface is elegant, intuitive, and completely unobtrusive.

With a huge dose of charming humor, captivating gameplay, and a nice mix of strategy, General Chaos is addictive and challenging. If you like Cannon Fodder or similar games, you will love this console game. Highly recommended! 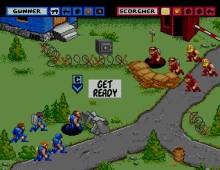 People who downloaded this game have also downloaded:
No Gravity, Incoming, Cannon Fodder, X-Men: Children of The Atom