Probably the first violent action game in gaming history to succeed at depicting violence in cutesy cartoon feel, Cannon Fodder is a great game from Sensible Software, makers of Sensible Soccer games. Similar to their soccer cousin, Cannon Fodder features cute little soldiers, an infinite amount of ammunition, a fine selection of bazookas and grenades, and unlimited fun and mayhem. Armed only to the teeth, your job is to take on the enemy in a vast selection of missions.

Things start off easy - on the first mission you can just charge round the corner with all guns blazing, and shoot the little enemy soldiers around the screen to your heart's content (the manual does point out that if you keep on shooting them they jump around like bunnies). But soon the missions become more complex - you end up having to destroy enemy bases, rescue hostages and even (horror of horrors) protect innocent civilians.

Controlling your little men is easy enough - click on where they want to go with the left button, on what they want to shoot with the right button, and with what they want to blow up by means of excessive force with both buttons. So you have no excuse at all when the eight enemy soldiers surrounding you at the beginning of one of the missions blow you into small bloody pieces with bazookas. A couple of phases seem pretty much impossible, and they come near enough to the beginning of the game to spoil your enjoyment. After learning the various survival skills such as splitting up your soldiers, using grenades and bazookas at the right ranges and dodging incoming bazookas you find it more than a little annoying to be inable to get any further. Still, you'll have so much fun that you'll just grit your teeth, curse the designers, and move on.

One of the most enjoyable features of this game is being able to get into vehicles, ranging from simple jeeps and skidooz to helicopters with guided missiles or some truly devastating ground gun bases. High powered slaughter without fear of reprisals. And when you start getting into tanks, well... can we say "squish"? ;)

For anyone who likes action with a bit of strategy thrown in with a dash of humor, Cannon Fodder is simply a must-have. It's fun, it's addictive, and you'll be amazed at how attached to your troopers (e.g. Joop) you will become.

This is one very good funny war game! You and your little troops are have to do different kinds of missions in which you can grow from soldier to general of higher. Go with your troops, kill the enemies, destroy their buildings, etc, etc. The game is played from a topdown view, so you can see the battlefield you walk on. The music and graphics are very very good! Worth a download! 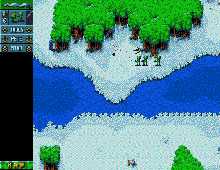 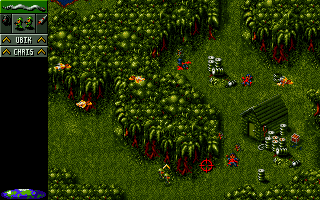