Haunted House is a great fanmade remake of a classic Atari 2600 action game of the same name. Since I fondly remember playing this classic until the wee hours when I was young, this superb SVGA remake from danjo and Acoders couldn't make me happier. The gameplay is similar to Adventure, another Atari classic, except the atmosphere here is much better and scarier. Your goal is to collect 3 pieces to a magic urn and escape the house without running into tarantulas, vampire bats or the ghost of the mansion owner. You can also pick up a scepter which will protect you from harm. The mansion is quite large - there are 24 rooms in all: 6 rooms spanning 4 floors. The floors are connected by staircases and the rooms are connected by corridors. There is also a secret passage, and the monsters can chase you up and down the stairs. Some of the doors are locked, so you have to find the master key to open them. Most of the game is dark, so a lot of patience is required since this makes the game feel quite claustrophobic.

As to why the original game is revolutionary in a few notable ways, this short review at Phosphor Dot Fossils says it all: "An early experiment in expanding the horizons of games on the Atari VCS, Haunted House is among the best-remembered original games on the system, right up there with Adventure and Yars' Revenge.

Haunted House broke a few barriers down by being among the first games to feature not just a maze, and not just a scrolling playfield, but a large, consistent, non-random maze bigger than could fit on a single screen. By "zooming in" on the portion of the maze the player is currently inhabiting, Haunted House gives this questing game an action component by allowing for wiggle room to escape the bats, spiders and ghosts."

This version of Haunted House is very faithful to the original. The first time that damn bat appeared out of nowhere and started chasing me up the stairs, I re-experienced the scary-but-excited feeling that I felt playing the original over 20 years ago. My only gripe is that the designer shouldn't have replaced the pair of eyes in the original game with a person as your protagonist - it feels much cooler to be controlling eyes :) Making you feel like the old days - that is what every good remake is all about, and is the highest praise I can give this excellent remake that action fans, whether they are fans of the original or not, will enjoy despite the slow start. Highly recommended, especially to fans of Adventure who can tolerate or enjoy the exploration aspects of action games. Fans of non-stop action should steer clear of this game. 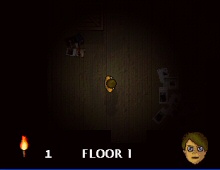 People who downloaded this game have also downloaded:
Galaxian, Castlevania, Super Mario Pac, House of the Dead 2, The