No Respect is a fun 3D action game from Appeal, published by OCEAN. In the game, you play a mercenary who flies a futuristic hovercraft-style vehicle in a fight against other mercenaries. Your goal is to conquer 20 arenas in the game by simply killing all your other enemies.

The 3D engine in No Respect is a very early version of the much more polished one that Appeal later used in Outcast. It produces very smooth animations with excellent details even on my computer (an Athlon notebook without any 3D accelerator). Unfortunately, the gameplay is somewhat limited and bordering on repetitive, and the arenas are not as interesting as the ones in, say, Death Drome or Twisted Metal. That is not to say No Respect is a bad game, though. If you enjoyed Hover or Fury 3, you will probably also like this action game-that's disguised as a sport game. Well worth a look especially as a beginning of the path Appeal embarked before creating the classic Outcast. 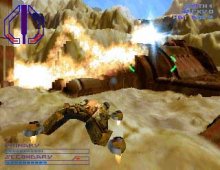