Nikujin is a fun ninja-style freeware platformer from Ikiki, the lone Japanese designer who brought us Teppoman, among other cool 2D side-scrolling games. Nikujin retains the same minimalistic approach as Ikiki's previous games: bare-bones graphics, smooth but simplistic "anime" style, and sparse levels. However, it is a much more complex, difficult, and ultimately fun game. You can not only jump in this game, but also scale walls and run very fast - in true ninja fashion. Also, like Thief games, the key to winning in Nikujin is not to kill enemies, but sneak or run past them. Since you have no weapon to speak of, you have to be careful not to alert the enemies to your position, lest they come running at you with the sword. You CAN actually kill enemies by jumping on them, Super Mario style, but you can only do that with unalerted enemies, and this maneuver is unnecessary in most cases.

Another design feature that makes Nikujin a lot of fun is creative physical puzzles. Since you are not a gun-toting Rambo guy who solves every problem by blasting everything in sight, you have to figure out indirect ways to overcome obstacles. That requires a mix of careful observation - particularly of enemy behavior, accurate movement, and precise timing. Although the game is fun, it gets very difficult far too soon - specifically, from level 2 onward. Already before you are used to the controls, you will have to pull off a complicated series of movements to pass by dozens of enemies undetected. This means that while Nikujin will appeal to all action fans, it could probably be finished only by a handful of expert gamers. Highly recommended, but not for those who are easily frustrated. 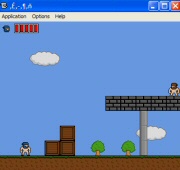