Miko-san's Miracle Board is an excellent 3D platformer from Japan that is remarkably similar to Pandemonium!, except it is less complex. Similar to Super Mario, your goal as Miko, a cute anime girl, is to run to the exit on each level, while collecting as many coins as possible. But because the game is in full 3D, with you controlling the protagonist (a cute little Japanese girl) from the first-person perspective, an added challenge is not to fall down cliffs or other hazards. The game is pretty simple, but devilishly designed 3D levels keep it from being repetitive. You can temporary "boost" your speed, although you will soon run out of the "turbo boost reserve" and must collect power-ups to replenish it. Similar to Super Mario, there are many bonus items you can collect - although the focus here is on trying to avoid falling down precipices rather than on stomping on enemies.

With nice SVGA graphics, smooth animations, and neat levels, Miko-san's Miracle Board should appeal to anyone who likes 3D platformers like Croc or Pandemonium!. It doesn't have as many levels as commercial titles, but more than enough to keep you glued to the screen - and curse that wobbly bridge - for hours on end. Recommended! 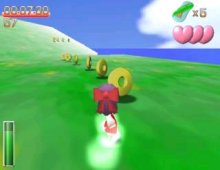