The Snowball Action Puzzle is a neat action/puzzle hybrid from Japan. The idea is simple: you control a 3D duck who must kill all the enemy ducks on each level by throwing snowballs at them while avoiding theirs. While this may sound like a straightforward clone of SnowBrawl, there is a catch: some enemy ducks sit atop pillars and other places that are out of your snowballs' reach. This means that most levels require you to first throw snowballs at switches and other triggers to lower the pillars, bringing the enemy ducks into your reach. On some levels you have to escape balls dropped by flying birds, and many levels have stronger enemy ducks that take more balls - as well as more powerful weapons - to kill.

With smooth graphics, zany anime-style characters, and clever level designs sporting a fun blend of action and puzzle elements, The Snowball Action Puzzle is highly recommended to fans of both genres, and especially anyone who likes SnowBrawl but wishes the gameplay were more sophisticated. My only gripe is that it is sometimes hard to gauge the ball's trajectory, due to insufficient shadows and other 3D cues. But the red crossharis make up for that... if you can see it in the snow. 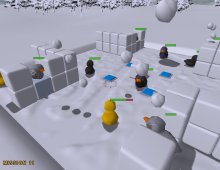 People who downloaded this game have also downloaded:
Miko-san's Miracle Board, CyberDome, Squeezils