CyberDome is a great 3D space shooter that sports a very complex 3D engine for its time, patented under the name "SuperSet" engine. In this fun game set in cyberspace, the gameplay is simple: destroy all enemy ships and targets as you progress through 64 increasingly difficult levels of action.

All action takes place within an enclosed dome set in space. You will battle 7 different enemies, each with an individually tweaked AI. In addition to delivering a fun, knuckle-blistering gameplay, CyberDome includes a very nice 8-level training mission to you learn basic concepts of the game. It also has a very nice auto-targeting feature that makes the gameplay much quicker and more fluid - as all arcade shooters should be. Formerly published as shareware by MicroLeague, the game has been released into the public domain by the designer himself. If you like a fun arcade shooter similar to Tempest 2000 but with more complex graphics, give CyberDome a try. It's fast, smooth, and looks great on a wide range of 3D cards. Highly recommended! 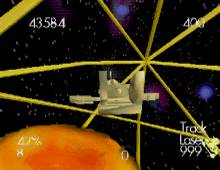