Extreme Assault is an addictive 3D action game from Blue Byte, a prolific German developer responsible for excellent Battle Isle series. Probably the best-looking action game ever made for DOS, the game boasts superb graphics, nonstop action, and extremely tough levels. Excerpts from this GameSpot's review says it all:

"Comparable to Black Dawn for the PlayStation, but far sleeker, Extreme Assault is a one- to four- player air/land combat game that pits you in a one-machine battle - who else - Bad Old Aliens who have established operations on Earth. They've taken your towns and factories, they've kidnapped your people, and they've burrowed a staggeringly vast underground network into your tender green planet. Why, the rotten little SOBs even had the gall to swipe and overhaul one of your own naval destroyers for use against you. Your Sioux AH-23 attack helicopter maneuvers with Jetsons-era ease. And while a joystick of some kind feels especially good here (force-feedback models are also supported), you can do just fine with up, down, forward, backward, left, right, and with the fire key.

Extreme Assault is possibly the single sharpest, cleanest-looking action game to date for the PC, and it's all managed without the need for any graphics accelerator cards (though 3Dfx is supported). Approaching targets ghost smoothly into view through the mist, alien chambers cloaked in darkness roll by in a shadowy shroud of paranoia, and beautiful, transparent holograms give you a hallucinatory taste of things to come. The out-and-out battles in open skies are tense enough, but Extreme Assault really starts to get freaky when you're exploring a dark alien subterranean fortress, skulking around each new corner with no idea whether you're going to find mines or a four-story Anime-style robot. In towns and factories on the ground, chopper-to-chopper (or whatever) combat takes a pugilistic, bob-and-weave turn as you use the local buildings to your advantage, sideslipping to launch missiles or barrages of cannon-fire. The third-person follow-cam view of your Sioux is pretty all right, but the low-interference virtual-cockpit view is better. And the totally unobstructed vista of the sans-cockpit mode is better still, and safer - there are just too many things out there to risk even a minor blind spot.

Some bad points: First, the existence of the easy mode is kind of a moron joke about game difficulty settings - you can take the easy mode that suits you best, and you can fight at what you may think is the best of your ability through some pretty hairy missions, only to learn that you can only proceed through a limited number of operational areas at an easy level. If you want to see more of Extreme Assault's gorgeous and dangerous world, you'll need to do it at a harder level, and you can bet your entire reproductive system that it's going to be difficult. Even easy mode gets brutal when things start showing up behind you and you've got missiles closing in every three seconds from all sides, but extreme mode is - and I say this in a loving way - completely insane.

The multiplayer value here is both good and bad. It's good in that the easy controls and hovercraft-like physics make for quick, brutal engagements (and not just with the copters - there's a T1 Tank in this game too, which also moves like a hovercraft, allowing side-to-side strafing movement). But it's bad in that you'll probably want more than four players, and you won't be getting them. Oh well. If you work your way (and nerve) up to extreme mode in the one-player game, you shouldn't be getting bored any time soon. Extreme Assault is a gorgeous, high-tech, lowbrow shooter, and you don't need anything special to play it except fish-eye paranoia, an Eastwood-esque trigger finger, and some form of a death wish." Highly recommended for all action fans. 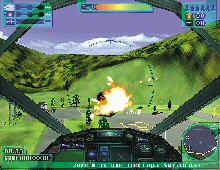