Darklight Conflict is an excellent space action game that offers impressive space physics despite the mindless nature of its gameplay. You play "the Human," a Navy pilot abducted by the Repton aliens to fight in their war against the Ovan race. The Reptons are a technologically advanced race, but they have no expertise about how to pilot fighter craft, so this is where you come in. Your objective in the game is not to win the war for them, but rather to obtain absolute proof that neither side has a clue about battle tactics or piloting skill. Fortunately, this hackneyed and quite laughable plot is not the main focus of the game.

Darklight Conflict is essentially a fancy space shooter. I say 'fancy' because it has excellent physics model that make you feel much more like piloting a spacecraft in space than most other games. For instance, explosions and debris - and their inertial effects - actually affect your ship and its movement. This strong physics model is wrapped with excellent 3D graphics that creates a great-looking space filled with beautifully rendered ships, down to their engine glow and lens flares. On the downside, the game is not full screen but 'letterboxed' : rectangular screen bordered by a patch of black at the top and bottom. This is presumably to make the game fun reasonably fast on lower-ened machines (say, P133), but it should give owners of faster systems the option to play in full screen mode. This is a minor nitpick, however, compared to the kind of visuals you get.

On the difficulty side, I find the missions very challenging - on par with the toughest missions in LucasArts' X-Wing, and definitely much more difficult than Wing Commander. There are over 50 missions with varied objectives, although most of the time you simply have to survive long enough to accomplish them. Fortunately for you, the AI is weak, so the challenge comes from impossible odds, not AI skills. Once you kill enough enemy ships, the remaining ones will be a piece of cake. But weak AI also means your wingmen are next to useless in the game. But hey, who really ever expects computer wingmen to be smart, anyway? ;)

Overall, Darklight Conflict is great fun as a mindless shooter with outstanding physics. The biggest problem with the game is limited control: you can't extensively reconfigure the control scheme, and so will be forced to use the keyboard for such crucial commands as acceleration and rolling. There are also no manual lock-on options (the computer simply locks-on to the nearest enemy for you), and there are no missile countermeasures. Even with these oversights and shallow gameplay, Darklight Conflict is fun enough to give you that "just-one-more- mission" quality. It could have been a real contender to the likes of X-Wing had it offer greater depth, but if you like space shooters, this is well worth your time. 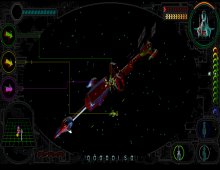