One of the strangest games you'll ever play, freeware or otherwise, Nelda Nockbladder's Anatomy Lesson is a fun action game with a unique blend of puzzle elements: you first have to figure out what to do in each level (called "lesson" in the game). I'll have to rely on the official word to describe this zany old game:

"While exercising at the local mortuary, Nelda Nockbladder attempts to teleport down to the snack bar, but a wrinkle develops in her plan. Nelda Nockbladder's Anatomy Lesson is a weird and wacky arcade game in which you must help Nelda navigate through the twisted paths of her bizarre world. The game offers 11 challenging lessons in which antagonistic body parts confront Nelda and attempt to foil her food-finding mission. In each lesson, Nelda must figure out what to do, and then survive long enough to do it. She can walk, jump, spit flaming custard at falling objects, climb ladders, bang switches with her head, kick things, and more. This imaginative game features four levels of difficulty, music, sound effects, a Save Game option, and even tips for completing each level."

The lessons are nicely varied, and the game consistently retains the weird and zany atmosphere with alien creatures that look and behave unlike anything you have seen before. Overall, Nelda Nockbladder is one of the very few action games that are truly zany, weird, and strangely compelling. Even the help files are written with a mixture of English with an obscure alien language ;) It's all in good fun, though, and at the end of the day, it's the gameplay that counts. Nelda's varied gameplay and the unique requirement of observation and deduction skills makes for a great combination of action and puzzle genres - and it's something other games should offer. Fans of Interplay's venerable Tass Times in Tonetown in particular should like this freeware gem. Besides, with names like Nockbladder and fooblick, who can resist? ;)

Note: the game is shareware, but registration is only for extra hints and goodies-- the game itself is complete, so I decide to label it "freeware" here so as not to confuse it with truly shareware games (i.e. those you need to register to "unlock" the rest of the game). And interestingly enough, the designer's name is Scott Miller, same name as the founder of Apogee ;) 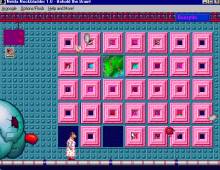