The Neverending Story II is a very poor action game based on the not much better (and quite bizarre) movie of the same name. The concept is simple: you're Bastian, and are called forth once again by the Childlike Emperess to save Fantasia, the Land of Dreams. Poor graphics and boring gameplay in a couple of different action scenes where you have to outrun giants (as in the movie) or push them over ledges. With every level, you will be awarded with another advancement in the plot, presented as new pages in a storybook. Boring gameplay, indecipherable plot. But at least the music stands out as a decent cover of the Klaus Doldinger/Giorgio Moroder classic. Not recommended at all, unless you're a big fan of the movie. 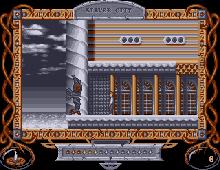