Nebulus places you in role of a high-tec frog working for a Destruction company. Your goal - get to the top of a tower and clear the way so it can be razed down. Strange idea, isn't it? To get to the top you have to avoid traps and use your brains to use the best possible way. This is not just an arcade but a puzzle game as well. After beating a level you will go to a bonus level in which you, by controlling your sub, have to catch fish and earn extra lives. This is a must-have game!

One of the best (and cutest) platform games ever made for any computer, Nebulus is a fantastically original and addictive gem from Hewson, British developer of several solid action gems that are virtually unknown on the PC but massive hits on the Spectrum and Amiga computers. As the aptly named Pogo, you'll be jumping just about everywhere in this charming game. Your mission in Nebulus is to destroy eight towers which have mysteriously emerged from the sea. Equipped with only snowballs as your weapon, off you go up the first tower...

The goal in the game is simple: all you have to do is climb the tower, triggering it to self-destruct, after which you can swim on to the next tower. In order to reach the top of each tower, though, you have to follow a mazy series of spiral steps built around the outside of the tower. Which is where the game's amazing rotational 3D scrolling comes in. This great feat of programming (for its time, of course) allows you to travel round and up the tower, entering and exiting various doors to emerge at different parts of the tower smoothly without ever going to the edge of the screen. Instead, the tower winds like a screw thread through your monitor, and the 3D effect is very convincing.

The further up you go, the more devilish puzzles you'll need to solve. And speed is of the essence too, as you have only three lives, and the on-screen counter counts down incessantly. The suspense is high, as you can't tell what you'll encounter round the next spiral turn. In terms of enemies, flashing blocks and bouncing balls can be zapped to add on points, but silver spheres can only be momentarily stunned. The snow crystals are immortal are very annoying -- all you can do is run away from them.

Overall, Nebulus has little to fault it, barring a lack of colour in the graphics and lack of save mode -- clambering back to the top when you have tumbled from a peak can be tiresome. Otherwise, Nebulus is a great classic that truly stands the test of time.

Rob's review from when the game was at CW#3: "Classic platform/puzzle game by Hewson in which you have to reach the top of various tricky towers before the timer runs out. I remember this one very well on the C64. The pseudo 3D graphics were amazing for its time, but the game also has original addicting gameplay which makes it an all-time classic in my opinion. Go figure it out for yourself, the IBM-PC conversion isn't bad. Colors look a little strange due to the EGA palette, but the game plays as well as the original 8bit versions."

Another one of those wee cute arcade games that I love. This is in some ways a side-scrolling platform, but as it scrolls sideways it kind of goes upwards. Dang, I feel dizzy thinking about it. You'll have to wait and see ;)

In this adventure you are Pogo, the small green dude. Eight towers have been thrust up out of the sea and it's your job to blow them to bits. You have to get to the top of each tower in order to do this, after which you move onto the next tower. But on the way up to the top of each tower is where you do the actual game playing. Firstly there is the steps you have to climb. They all over the place and you have to find your way to the top. Then there are enemies to jump over and kill with your snowballs (you must have the coldest hands ever!). There are annoying blocks and bouncing things which you have to shoot or run away from, plus other enemies too which you can only stun or just turn around and leg it.

Just to add a bit more tension to your game is the counter. That's right, those nasty folks have made a time limit on how long you have to make it to the top of the towers and get that self destruct triggered. Plus you only have three lives so you kind of have to race against time but also be pretty careful.

The graphics are old, but they look pretty good :) This game has EGA as an option as well as CGA woohoo! This of course makes the enemies a bit easier to see. And you might even be able to tell what they are! The sound is typical PC speaker scary sounds, but as usualy you get used to them :)

It's a fun game and takes an original approach to that whole side-scrolling genre. I'm not good with games that make me rush against time, but give it a shot. 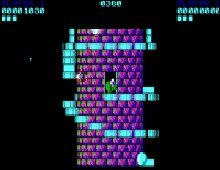