Monument of Mars is a decent little CGA platformer by Apogee released at the same time as Arctic Adventures and Pharaoh's Tomb, all three of which are based on the same engine. The game is a typical side-scrolling platformer with some nice puzzles along the way that you have to solve to proceed. Most puzzles are physical, e.g. how to get from point A to B -- no inventory items required. Graphics are as decent as you could hope for in a CGA (4-color) game, although they lack details that some CGA games like Montezuma's Revenge were able to achieve. Overall, a fun mouldie oldie from George Broussard, long before he became the executive of Apogee. An interesting anecdote: all three CGA games was first released under the "Micro F/X" label before they became the property of Apogee. 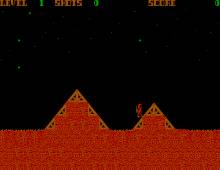