PANAMA JOE. That's what they call him 'round these parts; though no one knows his real name or where he comes from. But one thing's for sure, PANAMA JOE's a daredevil from the word "go!" No risk's too great if the reward's large enough. Winning. That's what's most important to him. And more times than not, that's exactly what he does. Because he's tough, clever and resourceful. And sometimes, downright pig-headed! Though occasionally (ah-hum), he's been known to get in over his head. Luckily, he's got a knack for getting himself out of hot water as quickly as he gets into it! Let's hope Montezuma's Revenge is one of those times...

Sappy manual (the passage quoted above) notwithstanding, Parker Brother's Montezuma's Revenge is one of those early platform games that invent the whole new genre-- in this case: treasure-hunting-puzzle-solving platform games. As Panama Joe, you move from room to room gathering keys to open doors, avoiding various enemies and traps, gathering treasures to score points, and gathering equipment to help you along your way, such as torches to light dark rooms and swords to eliminate enemies without losing a life.

What makes Montezuma's Revenge so addictive is hard to describe-- it's the combination of action, puzzle, devious level design, and innumerable additional touches. Black rooms, great sound effects, a large maze, disappearing platforms - it's a mother of a platform game, and a great one at that! Even though Panama Joe (you) looks like a melon with legs. Suffice to say that if you like clever action games, and have never played Montezuma's Revenge, you're missing out on a great lineage of games. 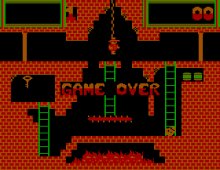 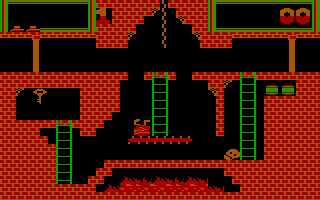