Moon Patrol is a great PC port of Atari's classic coin-op and Atari console game. In one of the earliest 2D platformers, your goal is to blast aliens flying overhead while jumping over rocks and chasms, all in the heroic act of defending the Moon from alien invasion. The game has excellent controls (especially when played with a joystick), very detailed graphics (by 1983 standards of course), and even memorable music. Fast, furious, and fun - the way games are meant to be. Another testament to Atari's undisputed knack for making addictive arcade games, Moon Patrol is a must-have. 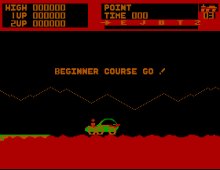