Possible winner of the "longest time between a game and its sequel" award, Montezuma's Return is an action/puzzle sequel to Parker Brother's classic Montezuma's Revenge. It took almost 15 years for a sequel to be released, and the result is a pleasant surprise. Panama Joe fans, prepare for another grand treasure-hunting adventure in the best Indiana Jones tradition.

At first glance, it seems Montezuma?s Revenge designer Robert Jaeger succumbed to the 3D graphics craze of the late 1990s: the game is a first-person 3D extravaganza similar to Tomb Raider. Although purists may be disappointed at this, it won?t take long before they realize that Montezuma?s Return is much more than a shoddy slap-3D-on-classic-gameplay type of game.

Similar to the original Montezuma?s Revenge, Montezuma?s Return strikes a near-perfect mix of action and puzzles. The action part is more focused on avoiding or deactivating various deadly traps than fighting monsters; you can only kick and punch the enemies as there is no weapon to collect in this game. The controls for the game are easy for anyone, as you just use the direction keys to move around, or you can use a mouse/keyboard combo or a joystick. Similar to the original game, you will spend a lot of time thinking about how to get from point A to point B, or how to reach a particular key or treasure that?s dangling tantalizingly on a ledge above you. Picture the devious levels of Montezuma?s Revenge projected in 3D, and you will have a good idea about Montezuma?s Return.

The game contains ?only? eight levels, but each of them is enormous. It will take you anywhere from 30 minutes to 6 hours or more to complete one level, especially if you want to access any of the nine bonus levels (which requires you to collect 100% of all treasures on each level). This means you can easily spend 50 hours or more with this game ? a pretty good value for your money (zero now, but $19.99 retail price at the time).

There are many downsides to the game, unfortunately. For some inexplicable reason, you cannot save in the middle of the level. Since you are only given 2 lives, this means you?ll have to die a lot ? and often start over from the very beginning of the level. You can easily waste 2-3 hours of playing time that way, making Montezuma?s Return a game that really tests your patience. Perhaps Mr. Jaeger wants to evoke the console-style play of the original (on the Atari 800 console, where you can?t save either), but this design choice is really anachronistic and more annoying than nostalgic.

In the end, I have mixed feelings about Montezuma?s Return. Similar to what I feel about Prince of Persia 3D, Panama Joe?s second outing just didn?t grab me as much as the original did. Perhaps it?s because this sequel is not as groundbreaking or innovative as the original, or perhaps I was much more impressionable when I was a wide-eyed 11-year-old youngster than a cynical adult that I am today. Regardless, Montezuma?s Return features the same clever level design as the original, so I?ll call this one a Top Dog and invite all Panama Joe fans to take a look. After all, he still packs enough punch fifteen years after his first outing to keep fans of action/puzzle hybrids happy for a while. Just don?t expect a Quake, and you?ll likely have fun with this game. 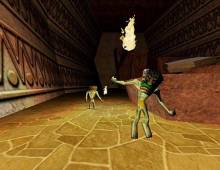