Long before Wolfenstein 3D by ID Software was made there was this game - Castle Wolfenstein! You're American POW in the German jail, located in the Castle Wolfenstein. Your goal - escape. Awful graphics and almost no sound but the game is quite entertaining. And hard!

True classic trash. Castle Wolfenstein was a popular action game from the 80s, with impressive graphics and sound (for the time), fast-paced action and remarkable attention to detail. The spiritual ancestor to Wolf 3D and the new Castle Wolfenstein, Wolf 2D (as it's now known) has basically the same premise as its later versions, you play an allied war hero trapped in the Nazi dungeons of Castle Wolfenstein and must escape, or die trying...

What made Wolf 2D special in the 80s was the amount of detail packed into the tiny game. Doors can be opened with keys or simply shot to pieces, guards can be either normal or SS troopers with bullet-proof shirts, even the grenades leave holes in walls you can shoot through; and just so you don't get bored, the entire castle is randomly generated, so you can play a whole new game at any time. These options (with others) made the game unique at its time, and I've still yet to see its equal in 2D games of this kind.

What sets Wolf 2D apart today is its unique format. The action is all top-down; each screen represents one group of rooms in the castle, meaning the feel is very different to a 3D shooter. Instead of walking around a corner to see several armed guards in a 3D game, in 2D you see the guards in advance, so there's no shock, you're just wondering how you'll get through this time (you have very little health. One or two shots can kill you).

At the end of the day, it's a classic. It was groundbreaking in its time, and it's still unique now. What more do you want from an 80s game?

Undoubtedly one of the best action games ever made, Muse Software's Castle Wolfenstein is a revolutionary action game that spawned a whole new genre. If the name sounds familiar to you, your hunch is correct: this is THE game that inspired id Software's blockbuster Wolfenstein 3D. Apparently they liked the game so much that id negotiated a deal to reuse the name 'Wolfenstein' for their game. And if the 'fragmasters' at id acknowledge the game as their inspiration, then it must be something special, right?

Indeed, Castle Wolfenstein is such a veritable masterpiece that calling it "special" is a huge understatement. As its spiritual ancestor, the game's premise will be familiar to all Wolfenstein 3D: you are an allied soldier who's been taken prisoner by the Nazis. You must escape from their castle, avoiding or killing Nazi guards along the way. The action is viewed from an overhead perspective, with 2D graphics for the objects and characters (hence its nickname Wolfenstein 2D by Wolf 3D fans). While not Earth-shattering, the graphics are more than adequate, and never gets in the way of the action. There are even different graphics to depict a dead guard, a dead guard with bullet-proof vest on, and a guard shot dead at his desk... talk about rigor mortis.

Of course, graphics alone doesn't necessary make a great game, and Castle Wolfenstein has plenty of action and adrenaline rush. You start out with a gun and one 10-bullet clip, given by a fellow prisoner. More bullets can be found by searching guards and breaking into supply boxes. There is a lot of great ideas in the game, many of which are rarely used even in today's crop of 3D-accelerated games. You can, for example, hold a Nazi guard at gunpoint to search him for supplies (unfortunately, though, you can't hold the guard as hostage to facilitate your escape-- only for a short while). You can also toss grenades at guards and watch the gory effect (or as gory as 2D, 4-color CGA palette can get). The grenades can burst through (concrete) walls, and it's a lot of fun to time it so that the grenade will hit the unsuspecting SS guard on the *other side* of the wall. Evil fun :)

One thing that makes Castle Wolfenstein very replayable is the fact that the castle is randomly generated each time you play. If you are killed or captured, you can either attempt the same castle again, or play a new random one, which could very well be more impossible than the last. SS guards also tend to surprise you, thus adding to the adrenaline rush of escaping. There is really nothing I can think of that's bad about the game. Castle Wolfenstein is a true pioneer in the now-crowded field of action games, and is a revolutionary game that remains, almost 20 years after its release, eminently playable (with slowdown program, of course).

Run through Castle Wolfenstein, eliminate the Nazi's. Search them for bullets and stuff. Infiltrate in the castle where Hitler supposed to be hidden. 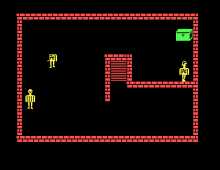 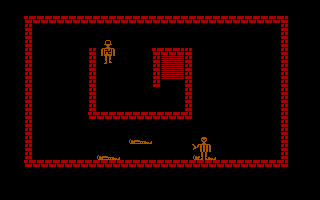