Some time after your escape from the Castle Wolfenstein, they're sending you back! This time you have a mission - find and assasinate the F³hrer himself. The same (bad) graphics as in first game (Castle Wolfenstein) and almost no sound at all. But the game can be quite interesting sometimes so make sure you at least try to get the Nazi leader.

The sequel to Muse's revolutionary Castle Wolfenstein follows the same basic formula as the predecessor, while adding a host of new features that make gameplay more complex. The plot follows where the first game left off: the brass at allieds headquarters are so impressed with your heroics in Castle Wolfenstein that they send you on a mission to assassinate Hitler. You must locate some explosives and set them outside Hitler's council room, then escape with your life.

The new features in Beyond Castle Wolfenstein make it even more innovative than the predecessor. You can now collect security passes, which can be used to give to the guards to gain access to rooms. You can also bribe them with money if you don't have the pass, although at higher levels they are more difficult to bribe. You must also now be more careful when you kill the guards: if you leave any witnesses to the crime, they will ring the alarm, alerting tough, bullet-proofed Nazis to your location. Fortunately, you can now sneak into a room, and kill the guard from behind silently with a dagger. You can also find tool boxes and first-aid kits in supply closets, and you will be alarms to disable and guards to bribe. Unfortunately, you can no longer toss grenades and hold the SS guards at gunpoint, although all the new features more than make up for the inexplicable absence of these features.

With many more gameplay features, the same adrenaline rush, and more innovative ideas, BCW improves upon Castle Wolfenstein in every respect. With the addition of alarms and dagger, you can no longer afford the "shoot everything in sight" tactic of the original. This makes BCW probably the world's first "thinking man's action game." 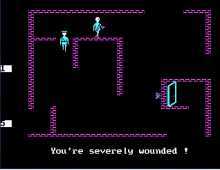