Classic Arcade Games for Windows is a good collection of small arcade games for Windows. One of Impressions' least-known releases, CAGFW includes five arcade games, all of which are variant of arcade classics but still a lot of fun to play. We have Maze Craze, a thinly disguised Pac-Man clone in which your goal is to eat all the pellets around the maze while avoiding the evil roving robotic maze creatures. The second game is the even less thinly disguised Invaders, which plays almost exactly like the Atari game of the same name: defend all alien flying saucers from landing on your planet. In a good Lode Runner clone called Mine Trap, you must destroy the invading mine monsters by trapping them in holes and then knocking them through the floors with your pick. Brickbuster is a straightforward Breakout clone - probably the blandest and least fun of the bunch. Lastly, we have Fighter Ace, a very fun Sopwith-style dogfighting game for one or two players. This is my favorite game of the pack, although it does get repetitive after a few tries and not as varied as Sopwith.

All in all, Classic Arcade Games for Windows is a good time waster if you have a few minutes to spare at the office. Nothing in the package will make you uninstall Microsoft's excellent Entertainment Pack for Windows series, but they are fun enough to come back to once in a long while. 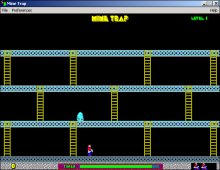 People who downloaded this game have also downloaded:
Frogger, Galaxian