Monuments of Mars, The

But yes, in this game you are a NASA astronaut. You have been sent to the mysterious planet of Mars. There have been many expeditions to Mars, but none have ever returned. Where are our men? Why have they not returned? Are there alien life forms on Mars that may have captured and eaten them? These questions need answering, so they pick YOU! You jump in your space ship, which is cool as its computer powered ;). You cruise over to Mars and land on the Red Planet. The first thought would have to be 'wow, what a green and red planet! And what are those funny looking aliens with flowers for antenna, and them strange robots!'

The game graphics aren't that great for a 1991 game, but its tolerable. I guess things ARE red when you are on Mars ;). The sound is PC speaker sound, and not that astonishing either. But don't worry, its not all bad! The game is one that I've played right through many times, so it can't be all that bad right!? I mean I was addicted.

So go, across the planets surface and then deep within the planet. Encounter strange, and yet some pleasant aliens. There are all kinds of exciting things. BUT WAIT! Why yes, yes there is more. You get four times as much of it, because this is an Apogee game, and there are four volumes! See if you can find the missing astronauts, collect some points, shoot some aliens and find out the secrets of Mars. 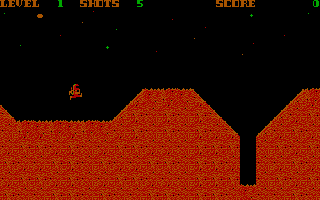 Monuments of Mars, The screenshot