Yet another outstanding fighting game made with ASCII's Fighting Game Maker application (never released outside Japan, unfortunately), Metal Blade has it all: unique and well-designed characters, fluid animations, tons of cool fighting moves, and even a great soundtrack besides. Athough the first couple of fights are ridiculously easy in solo mode, subsequent fights are much more challenging. Like all good fighting games, there is plenty of special attacks and combo hits to pull off. There is also a neat "skill" system, although it is unfortunately not implemented extensively in the game. If you like fighting games, this is one of the better freeware efforts you will find. The game could use more characters and backgrounds, but what is there is already very good. If you like the game, check out the author's many other fighting games on his site. Recommended! 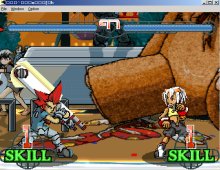