Eternal Champions: Challenge From The Dark Side

Eternal Champions: Challenge From The Dark Side is one of a small handful of one-on-one fighting games that came out for the Sega CD. Thankfully, it's one of the best. Including 13 characters (and 12 hidden characters), who each have their own distinct look, feel, and fighting style. Every character has around 11 special moves each, also with their own variations and approach.

The animations for the characters are top-notch. Many of the moves intricately flow together, and the animation for some of the longer combination moves are superb. The animation for some of the punches could use a little work in between, but it still looks good. Every character has their own different animations, and they're quite varied. From the intricacies of "Hapkido Cane Fighting," to good, old-fashioned brawling, they all manage to be interesting.

The environments are something I should point out, since they're nothing like you've seen from other "stock" fighting games. Every original character has their own environment, and within each environment, there are "hazards" of sort. Every level has around 2 to 3 hot-spots. When you knock an opposing character who's short on life into one of these hot-spots, your character is teleported to safety and the environment "finishes off" the enemy (example; You land the killing blow on an enemy, and he flies backward into a burning stake. You're teleported out, he gets tied to the stake, and burned to a crisp). Also worth mentioning is that there's separate animations for each of these environment fatalities, all distinct and great looking for the time.

While great looking, they can also be a bit gory. This game 'does not' shy away from the gore, and it shows. It even makes fun of it to "continue" with the gore even when you think it couldn't be any more brutal. It only really comes out when the environment kills a character off, but it can be seen in the heat of battle as well (example; the hidden character Thanatos can shoot spikes out of his chest, impaling you 'on him' for several seconds).

For 2-player purposes, Eternal Champions really shines. There are multitudes of options available, from the standard duel, to the VS. and Team tournaments. The types of games in the tournaments are really unique, like Russian Roulette (after a win, the other player's character portraits switch around randomly, while you eagerly press a button, killing one of them off), and Possession (After a win, you capture the character you were just fighting), to name a couple. There's nothing more satisfying then killing off your friend's best character, all the while having him curse you out.

Additions and improvements to the Genesis version are many, including much better music, almost triple the characters, and better graphics, animations, and environments. The environments are much more active now, and many little touches like a hazy Egyptian background and a pirate ship caught in a storm are busy and interesting to fight in. One thing to note is that you can tell the developers seem to have spent much more time on the 6 new stages, putting the originals on the backburner. The originals still look great and a couple were tweaked a bit (Xavier's stage is now set at dusk, and they completely changed Midknight's to better suit his background. They made one of the hidden stages a close recreation of Midknight's original, though), but they're not as active as the new ones. Also, there are extensive in-game biographies for all characters, and 2 cinematic deaths per person. There's also a great introduction movie that tells the story of each fighter, as well.

Overall, this is a great addition to any Sega CD library. Some people may find the control a little stiff, but once you learn the controls and find your perfect character, you'll be able to fight with the best of them. This is one of the best one-on-one fighters on the Sega CD, and you owe it to yourself not to pass it up. 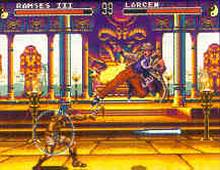 Eternal Champions: Challenge From The Dark Side screenshot

People who downloaded this game have also downloaded:
House of the Dead 2, The, Nightmare Creatures, Daikatana, Blood 2: The Chosen, X-Men: The Ravages of Apocalypse