A great fanmade fighting game based on Dragonball Z, one of Japan's most famous manga/anime series. The game is based on M.U.G.E.N., a powerful 2D fighting game engine that lets you create your own fighters, program their special moves and various attacks, and string them together with backdrops to form a CAPCOM-style 2D fighting game.

The highlight of Dragonball Z Millennium is the gameplay. Although it doesn't boast as high a number of fighters you can choose from as other MUGEN games, all the characters are very well integrated into the backdrops. The familiar characters are all here, though - from the well-known (Goku and his relatives) to the obscure (various baddies from different episodes). The game has many "rough edges" and inconsistencies that belie its amateur origins, such as some pixellated characters, different-sized fonts on the same screen, typos, and a few other quirks. However, it's the gameplay that counts, and here Dragonball Z Millennium delivers a lot of fast, furious action that fans of the anime will enjoy. Each character sports his/her own attacks that are faithful to the series, including "Super Saiyens" attacks of Goku and his brethren. I feel the game is a bit on the easy side-- combo attacks seem a bit too easy to make, for example, and enemies' responses are not quick. Veteran gamers will therefore find little challenge in the game, but with a variety of fighters from the show, great backdrops, and excellent features that MUGEN provides (e.g. practice, VS, and arcade modes), Dragonball Z Millennium is probably the best Dragonball Z fighting game in town for PC gamers. 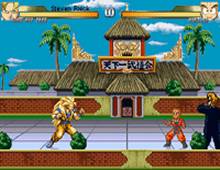 People who downloaded this game have also downloaded:
Dragonball, Fatal Fury 3, House of the Dead, The, X-Men: The Ravages of Apocalypse, Super Mario XP