Mass Destruction is an addictive 3D shoot 'em up that would have been much more successful had it not been released a few years too late. Similar to Return Fire, the game offers frenetic top-down shoot-everything-that-moves action.

Despite the repetitive nature, Mass Destruction has all that it takes to glue action gamers to the screen: big explosions, nonstop action, and intuitive controls. Although it is basically a shooter, each of the game's 24 levels has distinct tactical objectives. Terrain ranges from the arctic tundra, Middle East deserts, rural plains, to crowded urban areas. There are plenty of secret areas and power-ups to discover, but you must be sure to accomplish objectives before time runs out.

There are 3 different tanks you can choose to control, ranging from the usual quick-but-vulnerable kind to a slow-but-durable one. Ammo is easy to replenish, and there are dozens of different weapons you can use, from mortar shells to heavy-duty flamethrowers, guided missiles, and explosives. On the hard difficulty level, Mass Destruction will challenge even expert gamers. Multiplayer mode via IPX is competent, although more modes would be welcome. While the graphics are merely passable, and the sounds terrible, the gameplay saves the day and makes this game a worthy addition to every action gamer's collection. Highly recommended! 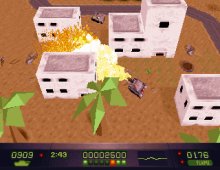