Major Stryker is a Raiden-type game produced by Apogee in the early 90's. You know what these games are like, Ctrl to shoot... the type of game that Apogee are infamous for producing around that time. Major Stryker firmly fits in the Raiden arena, as virtually nothing new has been added to the gameplay. A scrolling top-down shooter is what you expect, and its what you get. Which isn't to say that its not entertaining, it is, and if all you're looking for is mindless blasting, you'll find it here.

The graphics haven't aged well, particularly the mugshots of the character you play, quite simply awful, and the sound is your fairly standard MIDI soundtrack supplemented by the 'bangs' and 'bleeps' that I swear must be pulled off some video games sound effects CD. With about thirty levels, this isn't one you'll complete quickly either. Worth a look.

Major Stryker is a fun top-down shooter from Apogee that features smooth parallax scrolling, detailed EGA background graphics, decent controls, and diverse enemies. There's nothing here that breaks the mold, but even if the action is typical and the premise familiar, Major Stryker still packs enough punch to entertain action gamers for the few hours it will take to finish it. Worth a play-through, and definitely worth the cost of registering the shareware version. Too bad Apogee has discontinued this old game - but you can download the fully registered version below. Also an interesting anecdote for fans of Apogee trivia: the main character in the game, Harrison Stryker, is related to Duke Nukem, a far more famous Apogee character. 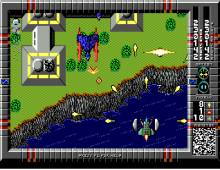