Mage Craft is a fun freeware action/RPG game from Robert Lupinek a.k.a. Darthlupi, a lone programmer. Similar to Magic & Mayhem, the game weaves elements of action and RPG into a very fun game. The plot, according to the official site: "[you] play the role of a young student in the mystic arts. You live in a time of strife between your home land, the Jang Empire, and the Altan Empire. As a child you orphaned during an Altan attack. When you reached the proper age you joined the Jang Army in hopes of gaining the ability to exact your revenge on the Altan's. During your first year you are recruited into a special school for the magically inclined after your talent for the arcane arts is discovered by an instructor from Mage School. You excell in your craft and are soon one of the top students. Your only rival is a girl by the name of Lisa Yang who is in a grade above you. Through your rivalry you develop feelings for each other and soon fall in love.

As too often happens all good things come to an end. Lisa graduates and is given her first assignment. Rumor has it that the Altan Empire is building a weapon of mass destruction on a remote island. It is Lisa's job to inflitrate and destroy this weapon if at all possible. It has been months since she was supposed to report in. You plead with your superiors to let you graduate early and make a rescue attempt. Your pleas fall on deaf ears. You soon decide to take matters into your own hands. You sneak out of Mage School, hire a boat, and set out find your long lost love."

You view the action from the bird's eye view perspective. Each enemy you kill leaves behind "essence" - basically experience points you can collect to improve your mage's stats, which range from arcade ones such as health and power (of the spells) to more inventive skills such as summon (determines how powerful your summoned creatures will be) and cast time (the speed at which you can cast the spells). The most fun aspect of the game is, true to its name, collecting various ingredients for spells and learning new ones. This is similar to Spellcraft, but more simplified and easier to use. The levels are huge and interesting, populated by a wide variety of enemies. If you enjoy action/RPG hybrids, Mage Craft is a crisp-looking and fun freeware game that has enough depth to keep you playing to the end. One warning, though: I find the game very difficult for the first 1-2 hours until I discovered more powerful spells, so beginners should be wary. 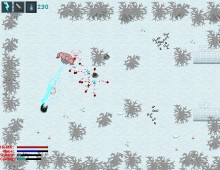