Mad Mix from Spanish developer Topo Soft was released as The Pepsi Challenge in the UK, although there isn't anything related to Pepsi in the game. It's a Pac-Man clone, but there are some, err, 'alternative' power-ups, such as transforming you into a hippopotamus, allowing you to crush ghosts. There are also tiles and barriers which force you to travel in one way only, and runways which turn you into a jet fighter and let you shoot at the ghosts! The graphics are colourful, although the music is terrible. It's a bit easy but I enjoyed it, and I think the game is aimed at younger players anyway. Especially for the game's wonderful creativity... even if it's not so original. 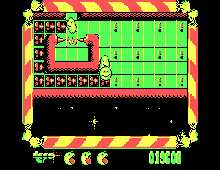