Vampire is a great fanmade Castlevania-inspired game from Sprite, one of Japan's oldest freeware developers. The game plays remarkably similar to Konami's classic, except you now control a heroine. Armed with a whip similar to Konami's hero, you will go through level after level filled with undead monsters and hostile animals, all action taking place late at night in appropriately spooky places.

Again as in Castlevania, you can use the whip to swing over chasms. The animations are very fluid, the backgrounds nicely detailed, and the gameplay enjoyable. The level designs are not as interesting as Konami's game, however: don't expect to find huge hidden areas, alternate paths, or other secrets in the game. But for a freeware platformer, Vampire is much better than most others of its ilk. Too bad the action is over a bit too soon, and the "boss" monsters are somewhat uninspired and predictable. Recommended for all Castlevania fans. 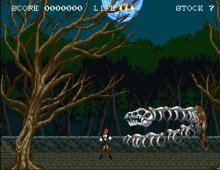