Legend of Billy The Kid, The

The Legend of Billy The Kid is a great action/adventure hybrid in the style of Cinemaware's It Came From The Desert game, except this time you can play as either the legendary outlaw, or Sheriff Pat Garrett, the sheriff who hunted him down. The game is action-oriented, although you must follow the plot to know what to do next (as Billy the Kid, for example, your first task is to rob the bank). Most action sequences are either first-person gunfights (similar to Virtua Squad), or top-down action on horseback. The gameworld is vast: you will be able to visit numerous towns in the wild west from Santa Fe to El Paso, as well as forts, Indian settlements, and more. Naturally, each character has his own plot as well as unique action sequences. Stumble upon the outlaw's campfire as the sheriff, for example, and you will have to hunt them down in an action sequence; visit it as Billy the Kid, and you will meet fellow outlaws who will share tips and dispense clues. With vibrant graphics, two interesting plotlines to follow, and solid gameplay, The Legend of Billy The Kid is definitely one of the best games from OCEAN you have never played. 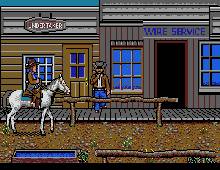 Legend of Billy The Kid, The screenshot

People who downloaded this game have also downloaded:
House of the Dead, The, Jetsons Space Race, Kingpin: Life of Crime, Godfather, The