Fairly poor action game based on the "Mafia" movie series of the same name. Yet again another typical movie-licensed title - as seen so often from U.S. Gold. Features five scenes or levels loosely related to the film. A level consists of two parts: A side-scrolling multi-directional shooter, in which you slowly walk around the scene, shooting the "bad" guys with slooow bullets, while avoiding to shoot the "innocent" guys. If you survived till the end of that scene, you'll reach the second part, which is seen from the first-person perspective and will soon remind you of your Operation Wolf days. Overall, gameplay is very dull-- better say "not there" to be precise. The levels lack any variation and only differ from the background graphics. Some praise, though: the graphics are quite frankly beautiful. I can't remember having seen such nice graphics in any other action game of that time. But what use are they, if game design lacks everything and gameplay does not exist?

The Godfather, a game originally created for the Amiga. This game is based around the undisputed king of all Mafia movies; The Godfather Saga. The date is the mid 1940's, World war 2 has finally finished - although saying that, world war 3 is on the verge, among organized crime syndicate's for the complete control over New York city's, underworld thrown. One criminal war being one of the more vital one's, five major Organized crime family's warfare against one another, one of the crime families being a Sicilian family, called: The Corleone's, lead by Don Vito Corleone aka The Godfather aka your boss.

Ever wanted to control casinos and a chunk load of gangsters, to order about? I know I have, but unfortunately this is not going to be that game. Thing's are a little different, the fact is your just a 'small fish' within the criminal underworld, your role in the game is of a 'hit man' for the Corleone family, who's forced to venture around the mean streets thus getting his hands dirty, taking out The Godfathers rivalry, that are set out to destroy the family, so the only real option being is to eradicate them, before they eradicate you and the family.

How the game operates (not talking technical wise, here) is interesting. Altogether there are five hard and painful level's to complete, each level is a decade forward from the one before, also in different location's from one another. The aim, is to exterminate the enemies who walk among the rough, cold streets - being careful *not* to harm any innocent parties that happen to stroll around the levels, conveniently wondering about, blissfully unaware that a St. Valentines massacre-like situation is happening right under his/her nose.

If you happen to kill and innocent victim(s), your respect level sinks down - which is not good at all, if such a thing happened numerous times, the family will 'disown' you, and the mortifying words "GAMEOVER", pass in front of your eyes (well in so many words). The game features some nice little, mini games, in between levels, which will test your ability to shot straight and your swiftness - by shooting gunmen leaping out from under bars and walls - but once again, make sure your shooting the actual enemy and not some dude who just nipped out for a packet of smokes.

As outlined above, your not actually 'The Godfather' in this story, your one of his (and only?) hit men. Smartly dressed with an attitude, and a dirty habit - smoking :P. Lack of moves can be quite annoying at times, with only the extremely basic control's, such as - shoot, walk left and right, and the ability to duck from bullet's. You can't help but think, that the gun that you use, has been swiped off the extremely cheap shelf from the gun shop, either that, or it was self made, made whilst having a blind fold over your eyes - "Why do you say this...? The gun can't be that bad!?" I'll admit that the gun is pretty suitable for the first level, but as you advance into harder level's, by the time some guy that's shooting you, has shot 3 or 5 shot's, only just one bullet has managed to leave your gun. A majority of the time this makes the game, un-enjoyable and frustrating, to say the least.

The people you'll grow in loving to hate. Every level is swarmed with these guys, as level's progress, enemies will transform into a state of looking identical to the past level's "Innocent" people, thus making it harder on you, deciding whom to actually shoot, and who not to, when they gallivant past you - because if you've only a tad bit of life left, and someone who you thought was innocent turns around and caps you one in your ass, then that's not exactly great - but on the other hand if you grow over suspicious and shot an actual innocent bystander, then your street-respect might run out, and the family will disown you; so as you can tell, you've really got to be weary at all times, I suppose that's what makes the game interesting and gives it that edge.

No action/platformer would be complete without a sort of 'Boss' at the end of each level, who seem ridiculously hard, to beat, and The Godfather didn't stop the trend, as far as that situation goes. It's not exactly the enemies walking the streets you've really got to be *that* worried about, it's the constant snipers, and what not - leaning out of the above windows and shooting down at you, or the guys appearing in doorways shooting the desired amount of shots, then quickly going back indoor's. Another fascinating thing being, the fact that Police are classed as a innocent party(?) The police play a next to nothing roll in this game, they don't pull any kind of "Your arrested m'lado!" crap, and don't really get on your nerves a whole lot, except when they decide to walk in front of your gun-fire like the other ever so bright, innocent numb-skulls.

One word concerning the Graphics: Excellent! Seriously, the graphics for The Godfather, are way ahead of it's time, in nearly all aspects. The scenery is really stunning and beautiful to look at, and most enjoyable. Extremely detailed in every sense of the word. You can obviously tell that a lot of time, had been put into the surrounding scenery to make it look, as realistic as possible - a job well done, indeed.

The sound on the other hand, is a different matter entirely. The lack of it, is not basically thrilling to tell you the truth. The only music I heard was at the start of the game, and in one other scene, and that's it - the music was mediocre. Other then that, whilst playing the game, you get to hear footsteps, and gun shot's; the foot steps are quite realistic, but the gun shot's sound like some sort of Zulu tribe instrument.

Unfortunately there does seem to be a few 'cons' whilst playing this game. For example; the fact that your gun-fire is comparable to a deformed tortoise in a race, is obviously a growing concern. Another 'con' could be the fact, that your character doesn't move at such a fast pace, this is indeed a problem whilst running like a coward, away from gun shot's.

I'll admit, it's not excellent or brilliant, probably only mediocre, but I like it ways. The advanced and stunning graphics are a definite mention whilst looking for pros on this game, I don't know many games released the same year, that look as good. The fact that, the game keep's you on edge, and does it's best to confuse you is another plus, it gives the game that edge, which I like. The whole 'mini' harmless fun games, in between levels, where your tested on your quickness, aim and sharpness, is another fun thing, as well. The whole 'Respect Level' at times saves the game from getting boring, as well.

Let's face it; The game is in no way, comparable to the quality of the movies in any certain way. The slowness, is a big concern, among a certain, few other thing's, that deteriorate the game play, as you progress whilst playing. Far to much effort has been put into the graphics, instead of the actual game play, I think we can all agree on that. But you have to admire the originality the game has, not forgetting the gleaming vibes you get from The Godfather, that make it really seem like an 1940/50/60's, era period. Although the game doesn't exactly deserve to be classed as the 'Official' godfather game, it's worth downloading if your a Gangster-game fanatic. 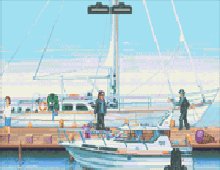