This is an obscure but excellent PC remake of Atari 2600 classic River Raid, a game that proves once and for all that female designers can design great action games as well as men. If you haven't been gaming long enough to know what an Atari 2600 is, here's the short scoop: the objective of River Raid is to score as many points as possible by blowing up tankers, boats, planes, jets, and helicopters. Don't go wild though, because if you destroy everything you won't be able to refuel at the large "fuel" barges. You can accelerate or decelerate, which helps in the game since you get more fuel if you fly slowly over the barges. As you destroy different enemies, you will receive different amounts of points. 30 for tankers, 60 for helicopter, 80 for fuel depots (but why should you?), 100 for jets, and a big 500m for bridges, which typically mark the end of the stage. You get three planes to begin with, and you get another one if you reach a certain number of points (10,000 I believe).

This PC version recreates the River Raid experience very faithfully-- down to the primitive-looking plane and graphics. Both the interface and graphics are very smooth, and the game remains as addictive as fun as it was nearly two decades ago. The game is in Polish, but you don't really need to read anything ;) Highly recommended, especially for anyone who misses the good old days of gaming (and don't we all?), as well as anyone who is curious to know how one could fit an innovative shoot em-up with strategic elements inside the mere 4KB (yes, that's kilobytes) of memory in one 2600 cartridge.

The game is actually titled "River Raid 2," but I don't want it confused with the awful River Raid 2 that was designed after Carol Shaw left Activision, so this name will have to do ;) 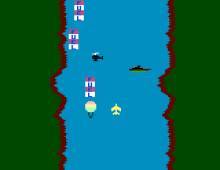