Sequel to Topo Soft's excellent by underrated Luigi & Spaghetti, this second unofficial outing of Mario's underrated brother is unfortunately not as fun as the first. In Luigi en Circusland, you will guide Luigi as he explores different parts of a circus. Only this time the levels are less inspired, the graphics more pixellated, and the gameplay more repetitive. The first two levels are just about all it takes before you see one clown too many. Fans of the first game will probably want to finish this one, but they probably won't find it as enjoyable or charming as the first game (although it does have a fair amount of funny enemies). 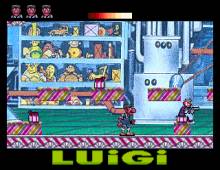