Back in the heyday of Commodore 64, Jeff Minter (of Ozark Software) was a household name for fun and addictive action games. As in most other games he designed, Llamatron puts you in control of a llama (Minter's favorite animal) who must rescue his fellow llama while shooting everything else in sight. Llamatron: 2112 is a an excellent remake of this action classic.

Llamatron: 2112 is a whole heap of fun that will no doubt make you giggle more than once. This old classic was brought you to by a llama-lover from way back - Jeff Minter. He was quite popular for the part he played in the development of C64 titles, and of course for his love of llamas and yaks which he has shown in the games produced by Llamasoft, his own software development company. If you have ever heard of the game "Attack of the Mutant Camels" then you have Jeff Minter to thank for that little beauty too!

Basically, you are a llama. Don't take that the wrong way! In the game you are a llama, and your job is to rescue the other llamas. You llama around shooting everything that gets in the way. The game is pretty much predictable in that sense. I think the main selling point of the game is the humorous aspect, not the gameplay.

The graphics are standard CGA pink, purple and blue. The fonts are hard to read, and the actual enemies and your own llama look a bit, shoddy. :\ The graphics aren't all that great, and it is a shame that the game is 1992, and is still such poor quality.

Give the game a shot, as it's still a barrel of laughs. Even if the graphics do try to ruin it, and the gameplay is kind of lacking, you'll still find it a real hoot. 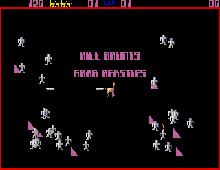 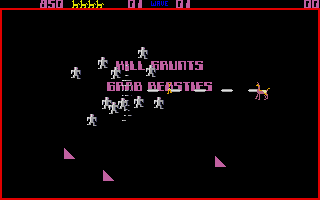