Chaos Engine (a.k.a. Soldier of Fortune)

From one of the masters of the action genre comes this excellent top-down action game that is fun in solo mode and exceptional in 2-player. Choose from a handful of mercenaries, each with his/her own weapons, for a blitz through forests, enemy camps, and beyond. The trigger-happy, kill-everything-in-sight idea is implemented to perfection, with tons of power-ups, secret items, and cool sound effects. In a departure from most action games, Chaos Engine was designed as multiplayer from the ground up - when playing in one player mode, the computer would take control of the other character, forcing a style of gameplay that was both co-operative and competitive, similar in many ways to the arcade classic Gauntlet. The soundtrack also reacted to how well the players were doing in the game. 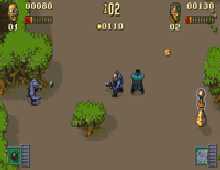 People who downloaded this game have also downloaded:
Cannon Fodder 2, Cannon Fodder, Out of This World (a.k.a. Another World), Flashback, Syndicate Wars